In the MMORPG genre, it is rare for a game to become highly popular among the already established big titles. On very rare occasions some games might have the chance to become a popular. When it comes to New World, however, things are different. This game has already established itself as one the best games of the genre despite the huge amount of problems that it has because it is still in development. New World is set to be released on the 28th of September 2021 and if you have missed the opportunity to play the beta version, here you will find some very useful information about the game that will save you a lot of time and headaches when you start your journey in Aeternum. 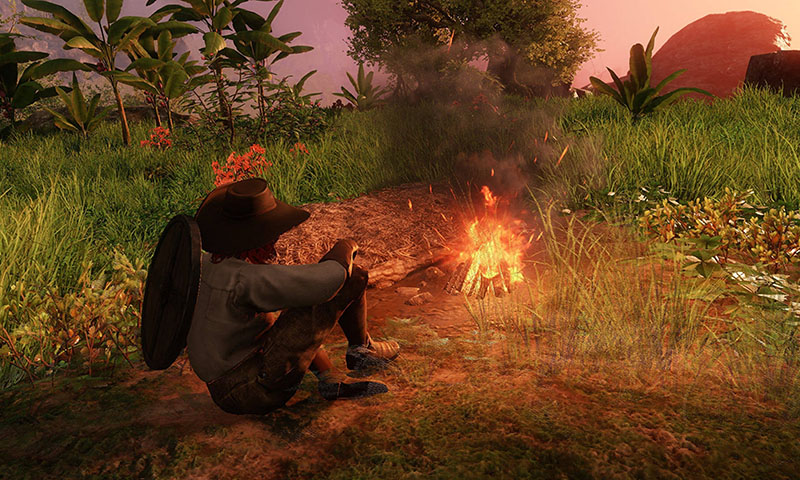 The first thing you need to know has to do with the campfires. So if you're not aware, after you complete the tutorial you'll be able to start on the primary questline right away. At some point during this, you'll get the ability to place down a campfire, and this can be used as a portable respawn point that also serves as a limited crafting station that you can use whenever you want.
To upgrade this campfire, they changed it from having to level your character up, to now needing to do specific questlines. Now a quick tip is that if you want to know which levels you'll need to reach to unlock the next campfire upgrade quest, you can press K and go to your attributes menu. Here you click where it says "Leveling Rewards". Then you can see the different milestones through there. And if you want to know exactly where to find these questlines, open up your map and click on the objectives button, and you'll see that you have the full list of the once you can take. Now there are restrictions for the campfires like they can't be placed inside of a landmark, which basically means that there's a radius around the different points of interest that prevent you from placing one inside. 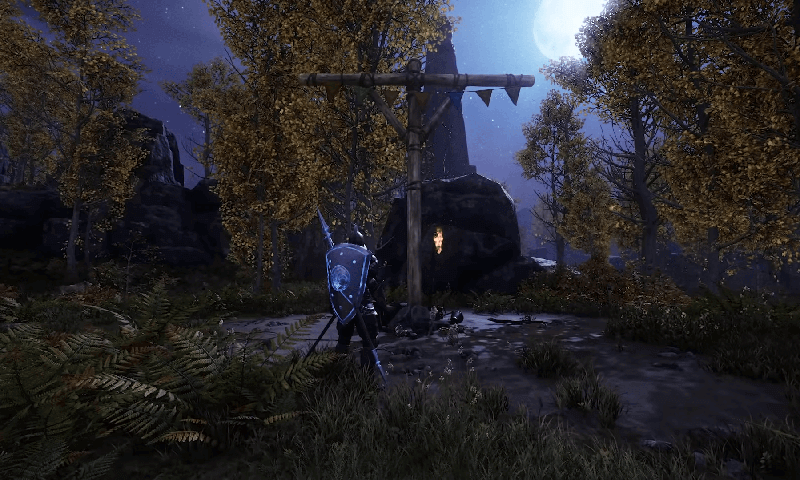 Also a long time ago during the preview, a lot of people were curious about what was the meaning of the wooden constructions with little flags on them. Well, these are known as campfire checkpoints. Sometimes you'll see them right next to different points of interest and even inside them, and this indicates an area you might be able to put down a campfire. You can always put one down outside of them, and sometimes there are free zones within them that you can fit some, but if you see a wooden pillar with flags on it, that's how you know you're at a checkpoint.

So we know that New World features 3 different factions that you encounter during your playtime. The Marauders, the Covenant, and the Syndicate. And starting from around level 10 you'll be able to choose one and any company you make or join needs to be a part of that same faction as well. One thing they did a while ago is that you are now capable of switching your own faction. There are restrictions to this like you can't switch to the most dominant faction with the territory. You can only switch factions every 120 days, and when you do switch factions, your faction rank and tokens will be reset. Now in the future, there might be some more mechanics to support underdog factions or those that are falling behind, but in the meantime, it'll be good to know that you are capable of doing this right now. 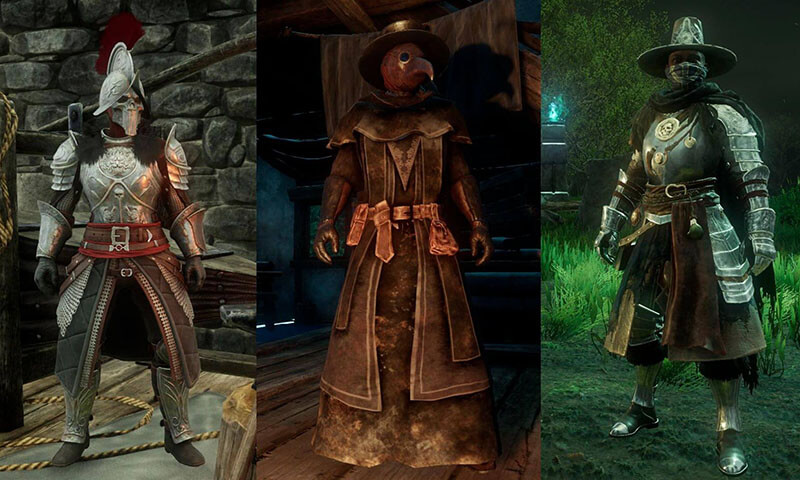 The third mechanic is one for the crafters. You can maximize every single crafting and trade skill profession all on one character, and the quality of life mechanic that you may not have been aware of is that you do not need the materials for crafting to be directly on your character for you to be able to actually craft these items. You can do what is known as remote crafting. By going to a workbench or whatever you use for your profession, and once you open that station, all the resources that you have sitting in your bank will become available for you to craft with. Now storage is localized, meaning that whatever settlement you're in will have a storage system, separate from other ones. But whatever materials you have sitting in that bank will be usable from the station. Since New World features a weight system for our characters, this is extremely useful. Especially really early on before you have any bags. It'll be very easy to get over-encumbered so to compensate for that you can fill up your bank, and craft away directly from the station. 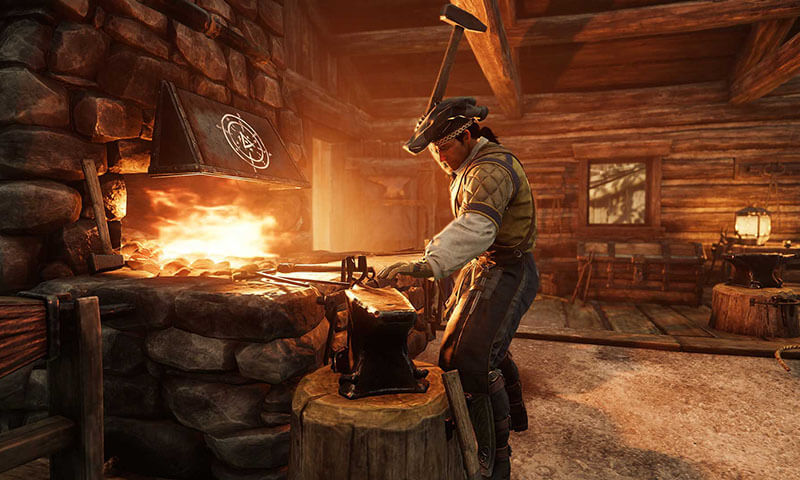 The fourth thing you might not be aware of is that there are about 4 different family groups not counting the animals, that make up the enemies of New World. The Lost, The Angry Earth, The Ancients, and The Corrupted. Well if you remember with the refined gemstones we can socket them into pieces of gear for different elements to be attached to them, the different mob family has weaknesses and strengths against the different elements. This is something that was implemented a long time ago. For purpose of this list, here are a couple of examples.

Check out our other New World Guides

The Corrupted are weak against the element known as Empowered or Magic. When you have a weapon infused with this, it emits a light blue glow similar to the one you'll find in the ancient guardians. And on the flip side, the Corrupted are strong against the Void element. This is because the corrupted are closely related to that element, and the angry earth would be weak to fire damage. You also need to know that different weapons have different types of damage. For example, swords have slashing which the angry earth should be weak to, and the hammer has blunt, the spears and muskets have thrust, etc. 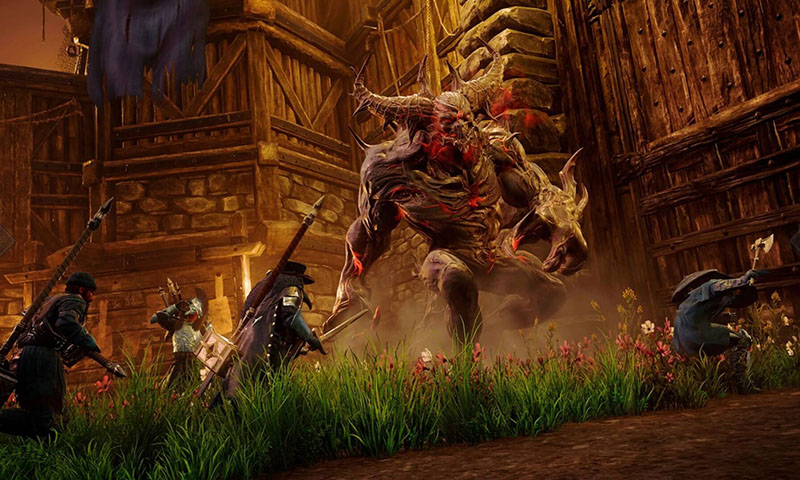 The fifth mechanic you probably didn't know about is related to the settlements. So very often you might feel, as someone who crafts items and gathers, that you probably have multiple different banks filled to the brim after one point or another. There are things that help with this, like the storage chests you can place in your house, or unlocking the storage increase perk when you level in territory standing. But one day you might come across a scenario where you have something in one bank, but it's far away and you need it for crafting or just need it regardless. And maybe you don't feel like running that day. Well, there is a way for you to transfer items between settlements, as long as your faction owns both of the territories. This was added a while back as one of the bonuses for territory ownership to give people a bigger incentive to work together in the factions. At the cost of gold, you can transfer items from distant storage to the one you're currently at, and withdraw them or store it from there. To start this process you need to open up your storage and click on the drop-down menu that's listed where it says "storage location" and then switch to the one you want to transfer from. Then through the menu, you can choose what you want to transfer, and then you're good to go from there. 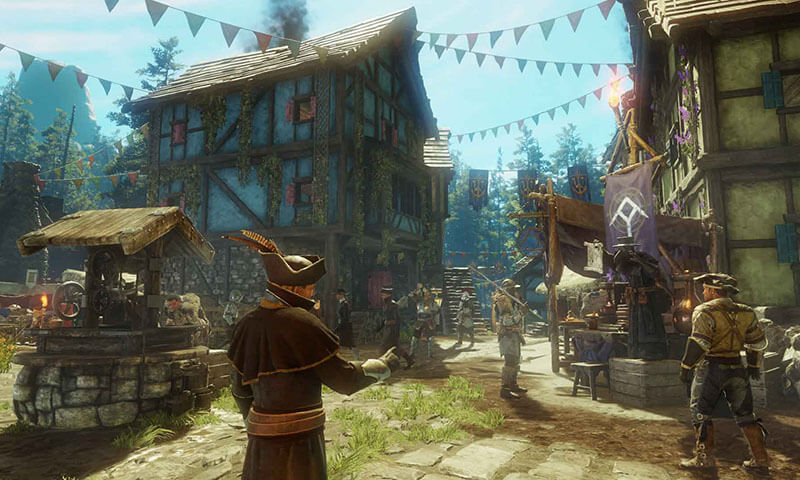 For the sixth one, we'll be diving back into the crafting for a mechanic you probably forgot about. This one is related to the artifact and regular crafting schematics introduced in the January Update. As a crafter in New World, it is possible for you to completely master each and every crafting profession, but all of the recipes you see inside these crafting menus will not be everything that you're able to create in the game. This is especially true for Furnishing and the Crafting professions. They introduced what are known as Artifact and Regular Crafting schematics. The regular schematics are like scrolls of paper you can get from drops or chests out in the world, and use those to unlock new crafting recipes inside the benches forever. The Artifact ones are very rare types of crafting recipes that have a much lower chance to drop, and you can only use it a total of one time to craft whatever item it is. These are probably going to be some of the best items in the game, and what type of items you'll see will be completely up to you to discover. 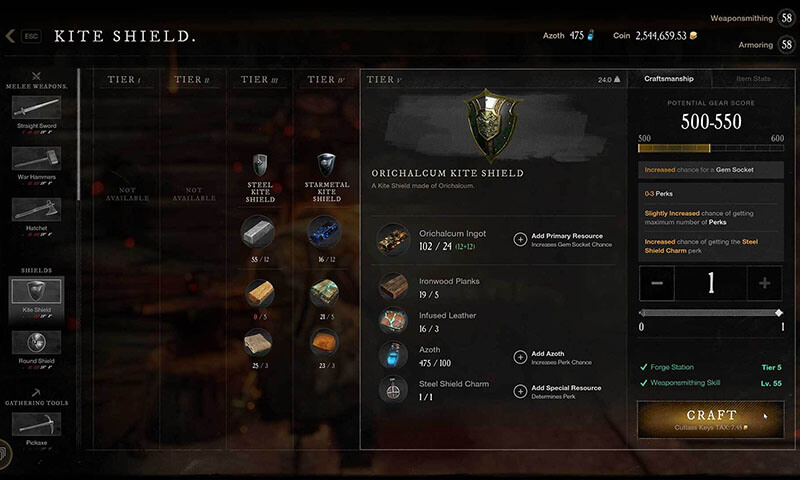 During one of the previous patches, we were introduced to the highly anticipated dueling system in the game. Now it is possible to fight people within your own faction but on top of that, you can also do team battles up to 5 players on each side. This can be initiated from the player menus or, you can do it via chat command. 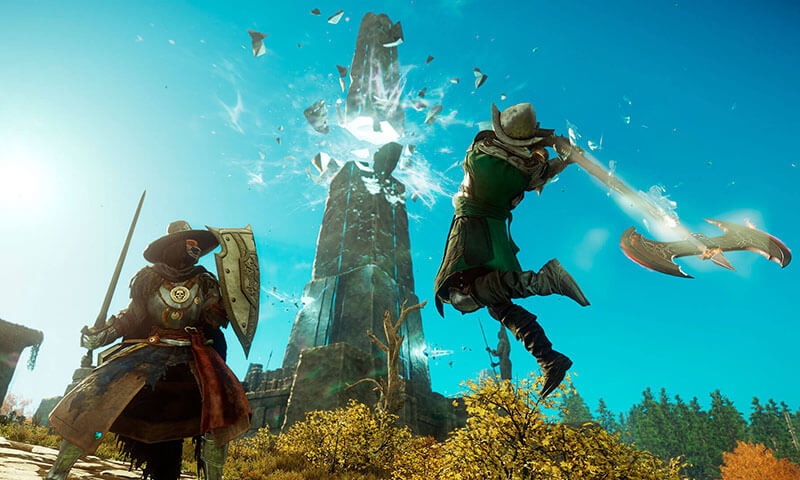 People also normally don't use these but they are very useful. They are located in Greatcleave the Eastburn Outpost, Mountainrise, and Mountainhome, and in Edengrove. All of these outposts actually have crafting benches and trading posts of their own. Since these territories can't be taken over by players, the bench levels always stay at tier 2. This can be useful to know just in case you need to craft anything basic in the wilderness that can't be made at a campfire. 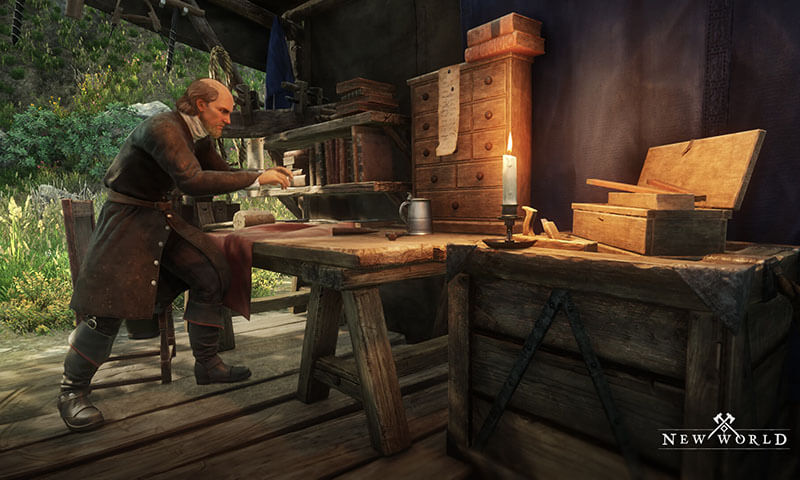 You of course can track materials through your compass once you get past a certain threshold in your gathering skill. But these resources will show up on the main map too. It's a very useful alternative for trying to track these things down, and for those of you interested in faction warfare, they added some bonuses a while back for both companies that own territory and you being a member of them. And factions owning a territory get different bonuses too. There are also have resource carts, so if your faction owns a territory, you can go to these and get things like hides, lumber, food, and a few other things. 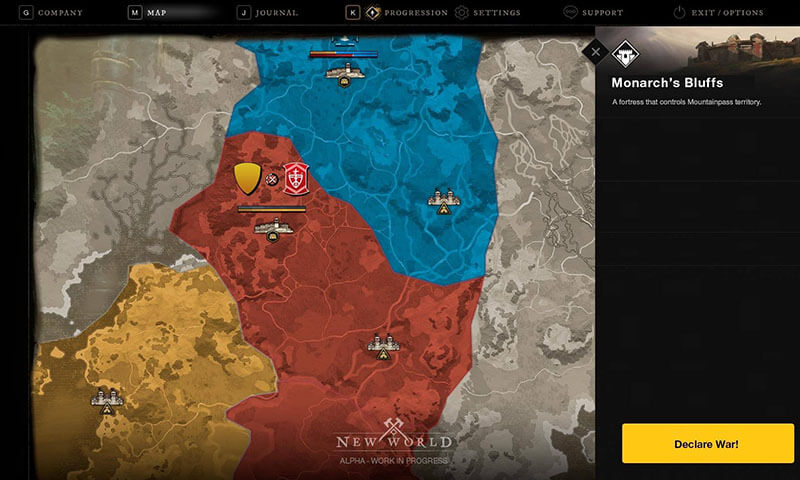 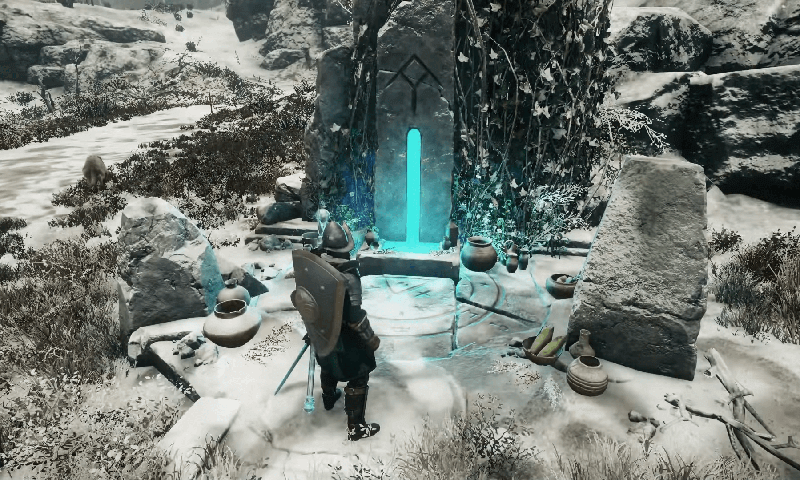 With all of these useful tips, you are now ready to start your journey in New World. There are still a lot of things for you to discover and enjoy. From the beautiful landscape to the combat. The in-depth crafting and professions and the many instances where you and your friends can have a great in-game experience fighting for the sweet loot. Of course, if you have difficulty with any of the things we just mentioned, or with something else. Or if you just don't have the time to spend in the game, but you still want to have all the rewards you can obtain you are at the right spot. Here at Boosting Ground we already have New World Boosting services for you to choose from, depending on what you want. Our team of professional boosters will complete your desired order in no time!