World of Warcraft fans finally got to experience the old version of the game with the WoW Classic's release. It brought back the nostalgic quest lines and old gameplay mechanics from the Vanilla version of the game. Vanilla has a unique style of gameplay that has almost nothing in common with the modern version. Shamans are one of the game's unique classes, and in this guide, you will learn everything you need to know about them.

Shaman is one of the most versatile classes in WoW. They can fight on the front line, stay back and cast spells, give consistent heals, and even tank to some extend if needed. They are one of the few classes with more strengths than weaknesses as you can see below: 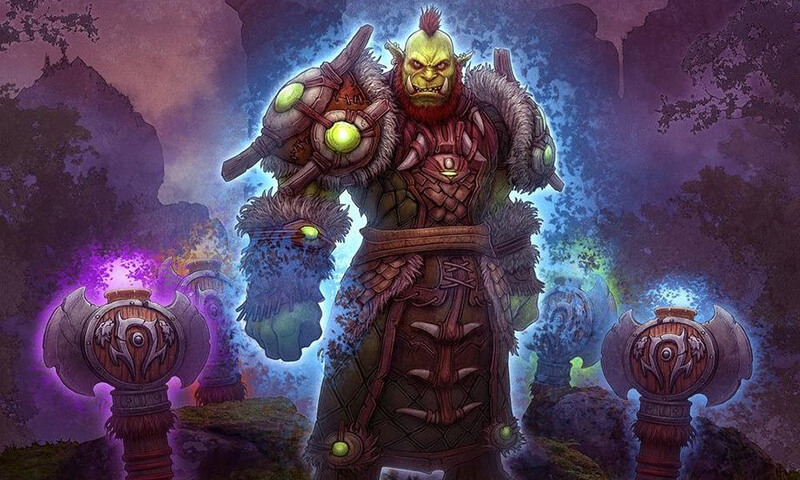 In World of Warcraft Classic, Shamans are exclusive to the Horde Faction. This gives you three race options to choose from Orcs, Trolls, Taurens.

Orc Shaman with enhancement specialization is very good because you have the attack power-on-demand burst, cooldown with Blood fury that will help you throughout every stage of the game. You have a 25% resistance to stuns. And plus five Axe specialization. This is going to help you against glancing blows and increase your DPS significantly. However, for PvE Trolls Shaman with Restoration or Elemental specializations are going to be the best choice.

Here you can choose between Orc and Tauren as they are both excellent options. You maybe have a little bit more of an edge with Orc if you are playing Enhancement. But for Restoration and Elemental, Taurens are the better choice. The increased health is always great, especially on a Shaman, and there is a unique interaction between War stomp and Totems.

Shamans can use almost every weapon in the game except swords and all the armor types except plate. That makes them have a large variety of upgrade options for their gear as they are not bound to one type of weapon or armor. The stats important for Shamans are Agility, Hit, and Critical Strike, but the priority of them can be different, depending on the talents that you decide to use. This class brings incredible utility. They are one of the best support classes being at it's best while helping others.

Shaman Totems and Why They are Important? 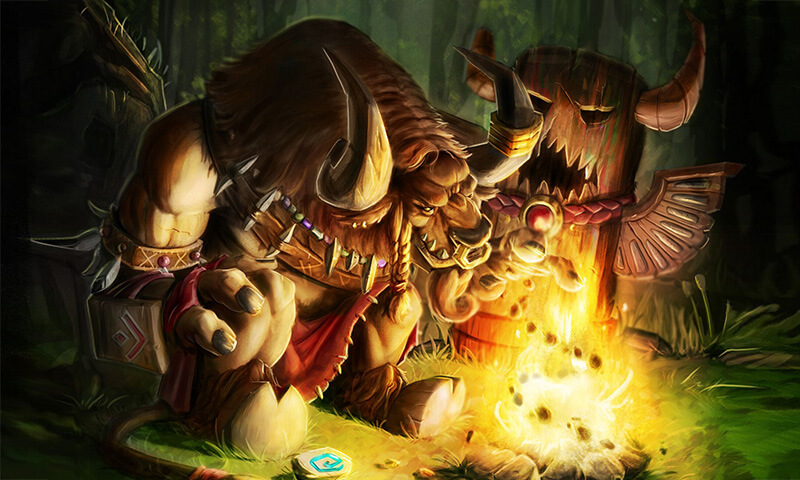 At level 6, you get your Earthbind totem. This totem slows enemies by 50%. Now, hot get an advantage from this. When a mob attacks you and gets afflicted by the Earthbind totem, then you hit the mob, and then you have side strafe through the mob, out of range of its hitbox, but you need to make sure not expose your back because if it is, your are susceptible to the daze mechanic. This way, you can trade one hit for one hit. Mobs out in the open world generally have a higher movement speed and attack speed than you. By applying this slow and then weaving in and out of range of the mob's hitbox, you're effectively negating both of those advantages, and you are trading one hit for one hit with that mob. If you have a really slow weapon and your mob is attacking really fast, you get the best result of this method.

When it comes to leveling, there are a few things you can do that can help you be more efficient: 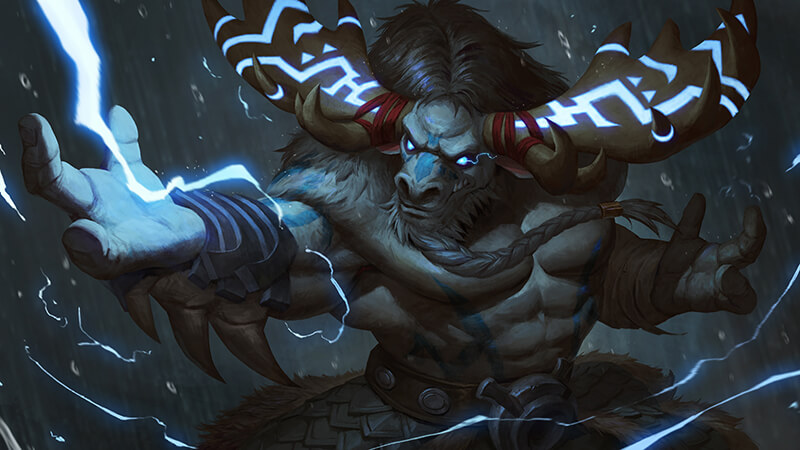 In World of Warcraft Classic, there are only 51 talent points, but Shamans have a large number of talent combinations to choose from. They are one of the few classes that have good hybrid builds at their disposal. Here are some of the most popular builds for Shaman:

A Slow Two-handed Weapon with Rockbiter

This is one of the most efficient damage setups. With Windfury, you don't know when or if it's going to proc, and you have the potential to overkill a mob. This is why you get Rockbiter, it scales really well with slow weapons, and you have access to the Earthbind kiting method because you will be using a slower weapon. You get more value from Storm Strike because it gives you an instant second attack, regardless of your weapon speed. You also have a better value out of Perry.

This is the second most efficient damage setup you have. It has extremely high PvP potential. Once you have Elemental Mastery and you have your Lightning bolt's fast cast speed, you will have insane single target kill speed. And if you do /sit against mobs, and  proc Eye of the storm, you will get 100% resistance to push back. However, the main disadvantage is that you can't mitigate damage from Earthbind kiting. 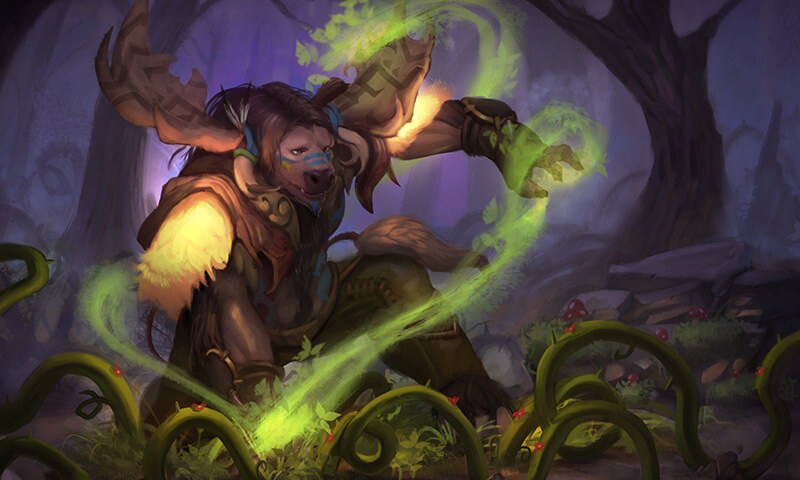 Fast One-handed Weapon with a Shield

With this talent build, you have a Consistent DPS and a pretty quick leveling from 1-40. But you have low PvP potential. Having a shield can be beneficial in combination with a fast, one-handed weapon. Also, you want to have Windfury, not Flametongue, because the math supports that Windfury excelled more when you have more opportunities to proc it.

Rotation for Fast One-handed Weapon with a Shield :

With your talent points, all spend on the Restoration tree, you won't really have any damage potential in fights, so it's good to avoid any PvP confrontations. A Restoration Shaman shines in a group with other players, but you need to have the right gear to be a good healer. Your healing gear priorities are +Healing, Intellect, and Spirit. When it comes to rotation, there really is no such thing, because healing is a situational reactive type of activity. However, it's essential to understand Downranking's concept because it is vital in order to become a good healer. As a Restoration Shaman, you have three healing abilities, Lesser Healing Wave, Healing Wave, and Chine heal. Using the most mana efficient ranks of Lesser Healing Wave and Healing Wave will ensure that you don't run out of mana too fast.

Downranking is the intentional use of lower ranks of spells to increase your mana efficiency. It can be done with any class with mana, and it's usable for most of the spells. Healers more commonly use downranking, but it can be used by DPS classes too.

Why Should you Choose Shaman?

Shamans bring some truly unique group utility. They perform incredibly well in a group with other players, but they can also be good on their own. Shamans have many different play styles that can fit the way you like to play the game.

WoW Classic Boosting and Its Benefits

Shamans are one of the WoW Classic highest skill cap classes. Because of that, it might take you some time to understand how the class works and how to play it properly. You can save some time with our WoW Classic Boosting serves and get help from a high-quality provider. Here at Boosting Ground, you will find a variety of services affordable for everyone. Our WoW Classic Boosting serves are a click away, and they will help you with everything from Dungeons and Raids to PvP ranks and Items. Don't hesitate and order your boost today!