Riot’s new FPS took the world by storm. Many players from other games flocked to try out the new 5v5 tactical shooter. Released on June 2nd 2020, it’s shaping up to be the next big title in the genre. In Valorant there are two teams of five players each, duking it out on different maps, that each have different layouts and strategic points. The setting and the story are in the near future, in which your characters are agents from different real-world countries. Each agent has unique abilities aside from the normal weapons. It has some similarities to CS:GO and Overwatch, although it leans more towards CS. It’s more like a methodical and tactical type of game, where you have to plan out your moves carefully. Even the layout of Valorant maps promotes camping and there are a lot of tight corners and angles you can take advantage of!

A short analysis of the maps

In Valorant the maps are significantly different from each other. They have different layouts and strategic points, which make it a challenging experience for players. In this Valorant map summary, we’ll look at some key points and features of Bind - a unique map that can be used in very creative ways! You can take advantage of the map by knowing some key points from which the enemy will come. That way you won’t get surprised or ambushed! It’s essential to plan out your moves with your teammates, so you have a sound plan of attack or defense. You can die easily here, just with a few bullets, so you need to make your moves count! One interesting thing to note here is the aesthetic of the maps. The color palette isn’t coincidental, because the colors are kind of muted but still colorful enough not to feel dull. The agents contrast pretty well with the background, making them easy to be seen on any Valorant Map. Another thing we need to mention is the camping spots, which can be really annoying sometimes, but that’s an aspect of the gameplay that Riot obviously planned out. Timing your abilities and using walls and angles to ricochet them will be really useful. Couple that with good coordination and communication with your team and you’ve got yourself a very solid strategy on any Valorant Map! 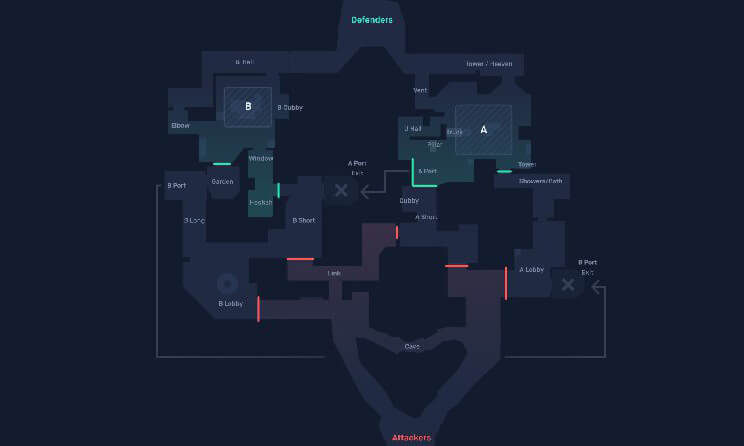 In this Valorant Bind map overview we’re gonna take a look at Bind and provide you with some tips and tricks on how to play it best! You can use this practical advice and practice in custom matches and later on try it out versus real players. This map provides a unique experience because of its unique feature - the teleporters. Not only that but it also has some quirky and interesting angles and spots you can take advantage of. In some cases you can scout several different places at once, oh and also the agent you play on this Valorant Map can make a great impact on the final outcome!

In Valorant When we talk about Bind, we have to note that there is a unique feature - teleporters! So far this is the only map that has teleporters and it makes the gameplay quite interesting and sometimes

unpredictable! If you use a teleporter it can be heard anywhere on the map, so it’s a risky move anytime you choose to use them. There are two teleporters currently on the map - near A site and near B site. Interestingly, they can only be accessed one way. For instance, if you’re an attacker, the portal on A site can be entered from the left. On B site, it’s to the left again. After going through the portal, you’ll end up in a corridor with steel doors, which can be opened only from the inside.

When playing on this Valorant map, you’ll most likely hear teammates doing callouts. These are essential on every map but especially here. This will help out your team greatly as you would be providing them with the location of enemies or signaling to rush in. Communication is very important when playing any FPS titles, as it allows your team to maneuver quickly around the map and be at the exact needed position. This is similar to callouts in CS:GO, where you would tell your positions or enemies’ locations. It’s important to be alert here, because enemies could surprise you at every corner and here’s where callouts are really useful. We’ll list some of the most commonly used callouts by most Valorant players: CT Spawn, T Spawn. A site callouts - A site, Long A, Short A, Cubby, U Halls and so on. B site - B hall, Long B, Hookah or Window, Short B. Essentially, they’re short and easy to process, so teammates can react quickly! 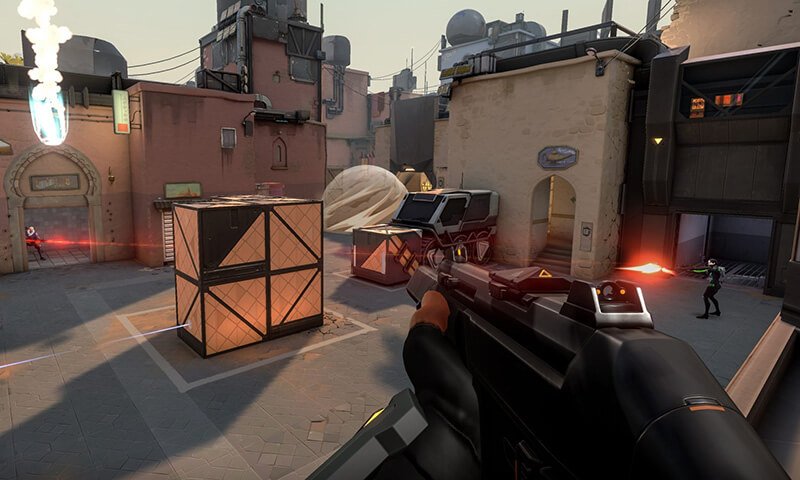 When we talk about defending in Valorant maps, picking a safe spot to position yourself is really important, especially early on in the match. And you shouldn’t only pick one spot, because a good practice would be to go into custom games and scout out and try different spots and angles. This will ensure that you’re not staying in one place every round and will make it hard for enemies to predict your position each time. This is known as rotation in Valorant - basically mixing it up and not staying in one place for too long, don’t be predictable! You’ll be able to adapt to your team’s strategy and make sure you’re helping rather than being a burden. Pay close attention to your team’s position as well. It’s quite important to be synched up with your teammates and know what they’re doing from time to time - just pay attention to the minimap!

Attackers Acces B site from in two main ways - Long B and B Hookah. You can take the initiative and charge into Hookah, defending it, or just play from B Halls. Another strat would be to play from B site using the steel container as cover. There are a few ways to cover B Long - you can play it safe from B sitie, or garden. Another alternative would be garden or just push to B Long and try to start a skirmish there and hopefully a kill. If you decide to play in from elbow you’ll actually leave your comrades exposed from B Long, so it’s a good idea to plan out and coordinate your moves with them adequately. In any Valorant map, a successful team would communicate all the time and rotate constantly, don’t forget to maneuver around the map and rotate!

In this Valorant Map Playing in either Heaven, Window or Tower allows you to keep an eye on many different areas at once. It allows you to view Bath and Showers, as well as Short A all at once, which is really useful when you’re defending and expecting guests! A very common strategy would be a single player to charge in solo and very aggressively from Showers or Short A, while the rest of the team plays it more passively from Tower. Also using rifles and snipers would be quite useful in those situations as it creates a great distance between yourself and your opponent, so you can stall them all you want and play it passive and safe. This is exactly what you’d want in this situation - buying time for your aggressive solo Rambo charger, he may be a scapegoat and die early on, but he/she will buy enough time for the rest of the team to overtake the enemy, slowly and surely! Another great spot on this unique Valorant map to defend Short A from is Cubby. To the left, there’s a tall box, which you can use for cover and actually position yourself in U Hall in the back. If the enemy team decides to rush B, you can actually rotate around by using the teleporter, which will force the opponent to leave someone behind to deal with you! This is actually a cunning Valorant strategy, but hey, whatever works! 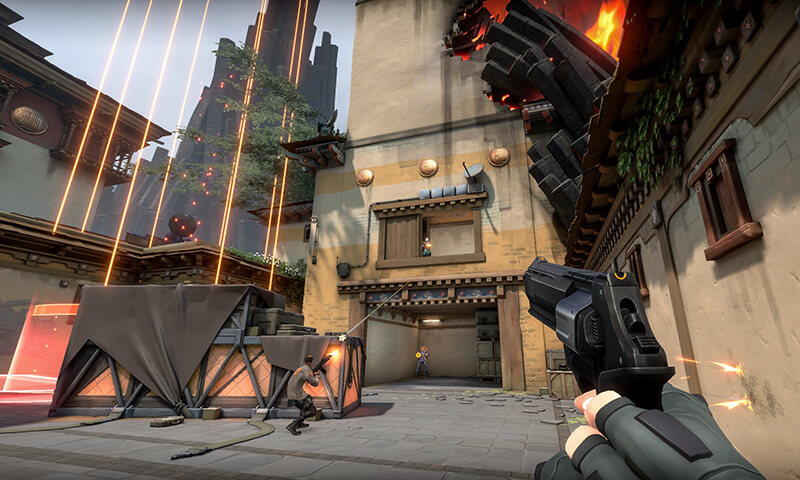 Best Agents to play on Bind

When we talk about Valorant Map strategies, we can’t miss out on talking about picking out the right agents for the job! We have to admit, some agents’ abilities are more advantageous on certain maps and you’ll see that a lot in pro-play and higher level ranks, once this FPS starts having official tournaments as well! There isn’t a clearly defined meta just yet, although players are quickly figuring out the best routes, camp spots, angles and corridors and how to rotate around them! Playing certain characters can boost your chances of winning and actually even counter enemy characters, but of course the player skill is most important here. Here, we’ll list some of the Valorant agents that are best suited to play on Bind because of the layout of the map and because of their abilities:

Here’s something else that’s pretty interesting about Valorant’s Bind - there are actually orbs you can capture that grant you one more ultimate ability in addition to your current one. The first of those is located in Showers and the other one is actually at a dangerous location - at the top side of Long B. Most players would allow the agent with the most useful ultimate on their team to take these orbs, but that’s not always the case. This is highly situational and it depends on what your team needs in the current state of the battle. It may be that you’re falling behind and that a second Viper ult is just what you need to make that one final aggressive push on this Valorant map to victory!

We offer various different boosting services that include leveling, rank boosting, different gear farming/grinding, as well as achievements and other goals you may be striving for! OurValorant Boosting Services will leave you completely satisfied. Our team of highly skilled pro-boosters will aid you in climbing the competitive ladder or getting that really rare item you’ve been struggling to get for months! We also have a unique leveling and rewards system here on the site, which provides you with different discounts and rewards after you purchase our services. Try out our offers and help your character soar to the top!