When Valorant came out, the game was labeled as a mix between CS:GO and Overwatch. Now, two years later, it’s considered one of the best free-to-play games in the FPS genre and it just can’t stop growing.
Valorant matches consist of two 5v5 teams, one of which tries to plant a bomb, while the other one attempts to stop them. Players can choose from 19 different characters to play with called “Agents”. Each Agent has its own playstyle, skills, strengths, and weaknesses.
In this guide, we’ll share everything you need to know about one of the most intriguing Valorant Agents - Chamber. 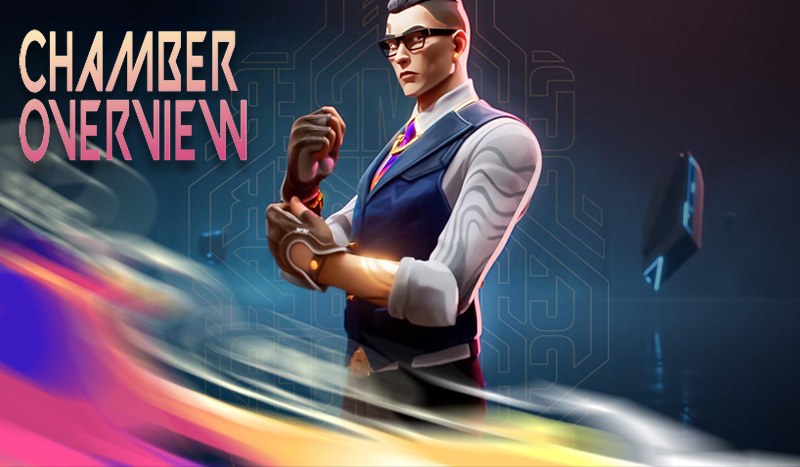 Agent Chamber is one of the four Sentinel Agents currently in Valorant. He is quite the character and always likes to be well-dressed… and well-armed.
In-game, Chamber is quite the wildcard. Put him in the hands of a skilled player, and his abilities can cause absolute chaos. But despite his high damage, he requires quite a bit of practice and understanding of the game, in order to be played optimally.
This is why It’s definitely a good idea to learn as much about him as you can, before jumping in-game with him.

The Most Versatile Among Valorant Agents?

Sentinels are supposed to be helping the defense of a team, but Chamber’s skillset is not like any other Sentinel. He plays almost like a Duelist with some abilities that can provide information and utility. This makes Chamber a truly unique and versatile character. 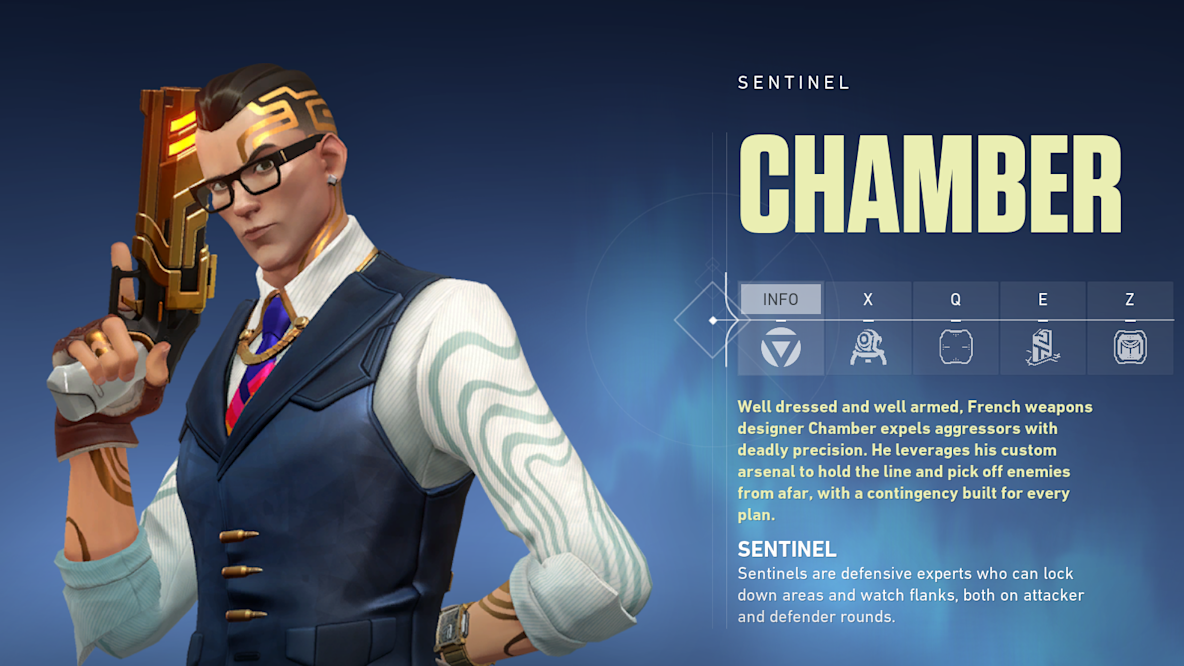 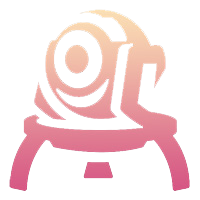 With Trademark, you can place a trap that will scan for the enemy team’s presence. When an enemy(that’s visible) comes in its range, the trap will activate and destabilize the terrain around him. This will also create a lingering field that will slow down any players caught inside of it.
Unlike Killjoy’s Alarm Bot, the trap from Trademark is visible to enemies. This means that if it’s not placed well in a concealed way, it will be easily spotted and destroyed. On the other hand, Trademark’s range is massive - roughly 3 or 4 times larger than the one the Alarm Bot has.
One of the cool things about this ability is that it has two charges. This makes Chamber quite good at covering his flanks. The maps in Valorant generally have more than one route which the enemy can flank from, so having two charges can be extremely useful in many situations.

When you activate Headhunter, Chamber equips a heavy pistol. But unlike the Sheriff, Chamber is able to one-shot enemies at any distance with a headshot, thanks to aiming down sight (activated by right-clicking). This is one of the reasons why Chamber is so good for securing long-range kills.
Despite looking like just a heavy pistol, the Headhunter actually has the power and functions more like a Guardian. And you don’t have to pay the hefty 2250 price for it!
Instead, you get it like a cheap ability, as each bullet only costs 100 credits. And any bullets that didn’t get fired get carried over onto the next round.
This skill is great for long-range duels because in those fights you need precision. So if you’re comfortable using the aim down sight function, you’ll love Headhunter. 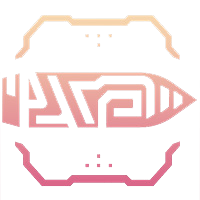 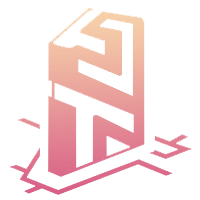 This is Chamber’s Signature ability. When you activate Rendezvous, you will place two teleport anchors. While you’re on the ground and in range of an anchor, you can reactivate the ability to quickly teleport to the other anchor. Anchors can be picked up to be redeployed and only Chamber can use them. Just keep in mind that after using them, there is going to be a time delay of roughly 10 seconds before you can use them again.
This is another very cool ability that will reward high skill and good play.

This is Chamber’s ultimate ability. When you activate it, you will summon a custom and extremely powerful sniper rifle that instakills enemies with a direct hit. Plus, when you kill an enemy with the rifle, the ability creates a lingering field that slows players caught inside of it.
This ability is stronger than the Operator, because you kill enemies with just one shot, even if it’s to the legs. Which will make the opposite team very careful about their approach. Tour de Force costs 7 ultimate points and you only get one clip of 5 bullets with this sniper. The sniper rifle functions more like a Marshal, rather than an Operator. But It has two levels of zoom distance just like the Operator. Despite its heavy appearance, it feels really lightweight and easy to control. Especially when you compare it to the sluggish and slow Operator. The fire rate is also much faster than the Operator. So you no longer have to worry about giving the enemies a small window to advance after every missed shot, as you’d have to with the Operator.
This ability really makes Chamber very hard to rush. And its one-shot kill ability means that he doesn’t even need the perfect shot. Honestly, the only downside of Tour de Force is that there are only 5 bullets. 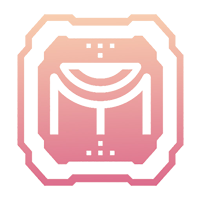 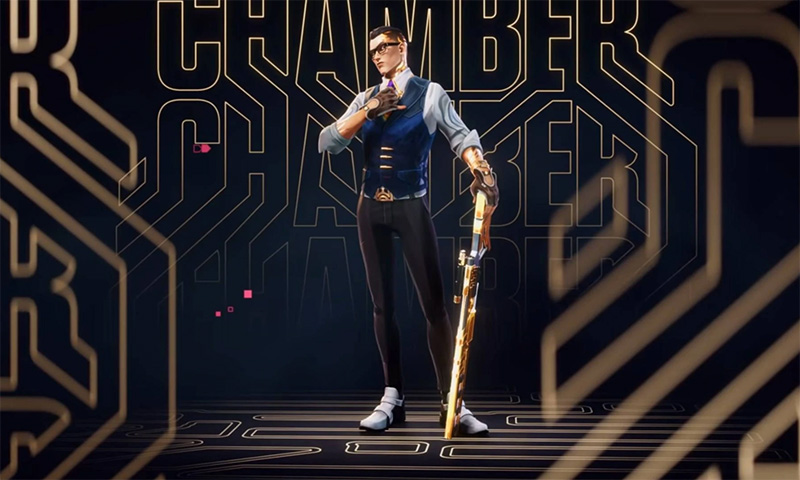 Some Notes About Playing With Chamber

Chamber can do a lot of damage when holding down a position and if he uses his abilities properly. But he can have issues while attacking on his own and usually, he will need some help from other agents when he is on the offense. Keep in mind that good players can outplay a decent Chamber. That’s because when he uses his Headhunter or Tour De Force, typically there is a voice line announcement followed by some gunfire. This will alert the enemy team that Chamber is looking for some long-range duels. Which will prompt them to close the distance between themselves and him, or find a way to impair his aim with smokes or flashes.
Another way to counter Chamber is to immediately rotate to another site, once you spot his position. This will make the Rendezvous and Trademark abilities useless until he manages to deploy them elsewhere. But that can take some time, so if you manage to do a quick rotation, you can avoid some of his main skills.
Without a doubt, the scariest thing about Chamber is his ability to whip out his deadly sniper or powerful Sheriff and then proceed to quickly eliminate the entire enemy team. The best way to counter this is with abilities that can suppress him. So Agents like KAY/O, Jett, or Neon can be really annoying for Chamber. 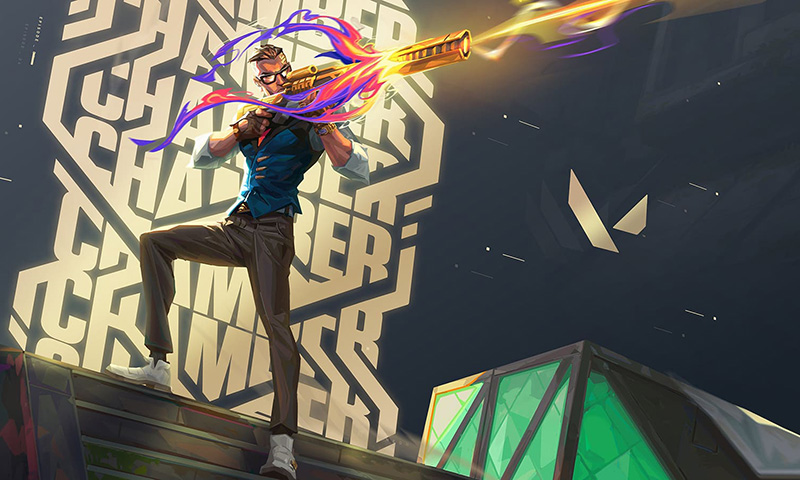 Chamber is an Agent that rewards good play, but it will punish you for missing your shots. And while this allows good players to hold down an area while fragging high, he is not the best choice for beginners. He might be powerful and versatile, but he has weaknesses that can be exploited with good play and teamwork. That being said, in the right hands, Chamber can be an absolute force to be reckoned with.

If you’re struggling with Chamber or Valorant in general, consider using a boosting service. Valorant Boosting is a great way to save yourself a lot of time and stress, by getting the proper guidance and training. Just imagine being able to play alongside a pro player who knows everything about the game and will give you incredible tips and tricks that usually take months to learn.
And if you don’t have much time to play and raise your rank, but you wanna experience those higher-level battles, you can get an expert to rank up your account in no time. It’s very easy to set up and you’ll have 24/7 support if you need it. You really can’t go wrong with Valorant Boosting. It’s safe, affordable, and a lot of fun.