Icebox is the newest map that’s now added to Valorant. Unlike a few of the previous maps, Icebox is mostly vertical and thus more difficult. With this added, it’s more difficult to line up headshots, which is the most effective way to get kills in Valorant. This map is split into three core areas: A, Mid, and B. We’ll first look at some general tips for the map, and then we’ll focus on strategies for each of the three parts of the map. 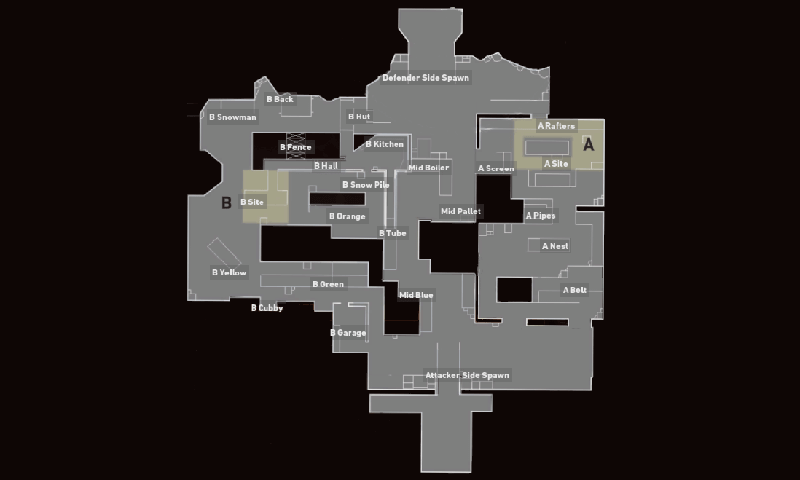 Learn more about all Valorant Maps and Agents here: https://boosting-ground.com/Valorant/news

As with all maps, it’s best to learn it in detail on your own nothing beats practical experience. If you want to get good at any of them you must learn the ins and outs, the nooks and crannies, of the map. Hop into a solo game, have a walk around, then try the map in normal games. Never start a ranked match without checking the map first.

When looking at the Icebox, it’s useful to know that it favors controlling Mid. In fact, having control of Mid is a massive part of being successful in Icebox. Controlling it offers a significant map control, as you can maneuver to either A or B, deciding to either flank, camp, or bait.
With Icebox, your playstyle will be fast-paced. With its many tight corners and angles, the map rewards players with a good and accurate aim. The map also has a lot of variability in terms of fighting. This map is split into 3 main lanes: A, Mid, and B, as we looked at briefly before. We’ll look at each of these in more detail now. 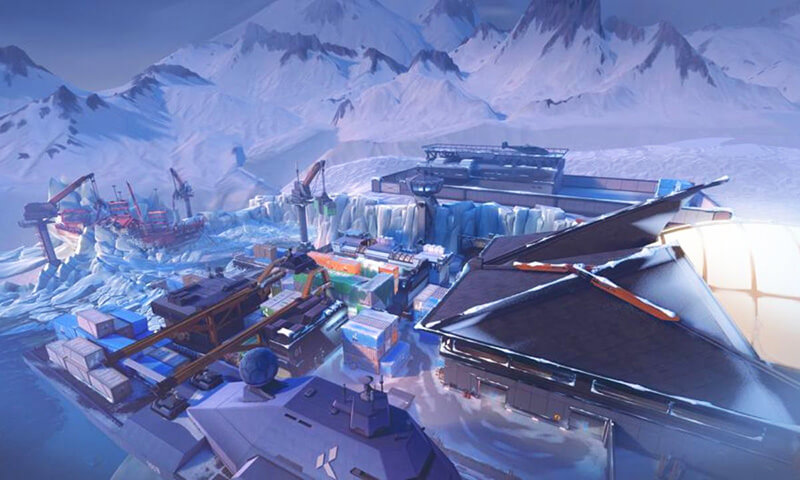 The first main lane of Icebox is A. ‘Lane A’ is primarily indoors and it’s composed verticality, more than you’re used to. Because of this, you’ll need to be checking your aim and positioning often. At A Site, you will find a lot of ziplines, which adds increased mobility to this part of the map. Here, your fights will be long-ranged from different elevations. With this said, short- and medium-range weapons won’t do you much good. Opt for assault rifles, such as the Vandal. for the best results. If you have enough money the Operator will be a great choice here.

A quick tip - Don’t jump on the floor from A Belt, or you’ll take fall damage!

If you want to win on Icebox, you’ll need to control mid. Controlling mid gives you a lot of options to progress in the late game, such as the following:

Mid has lots of corners and is less vertical than A, but still with a lot of variabilities in terms of height. 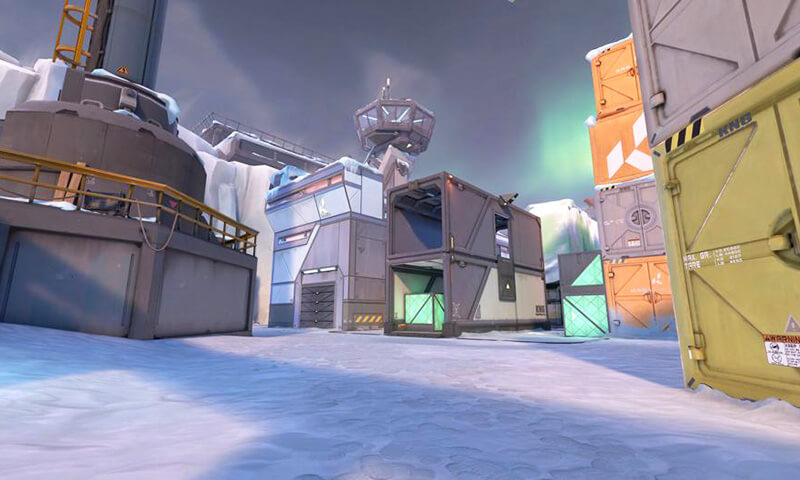 Lane B is the third part of the map. B Site is out in the open but still provides a lot of hiding places. Your focus here must be on skirmishing and winning duels. You will be in closer proximity to the enemy team and this will lead to a more aggressive playstyle. Again, assault rifles will come in useful here.

B Site quick tip - You can shoot through B Fence if you spot the enemy trying to plant.

The following section contains a few tips on different elements of Icebox.

When you are defending, there are a few chokepoints that you’ll benefit from holding:

Doing so will make it a lot easier to hold your position and win the round. 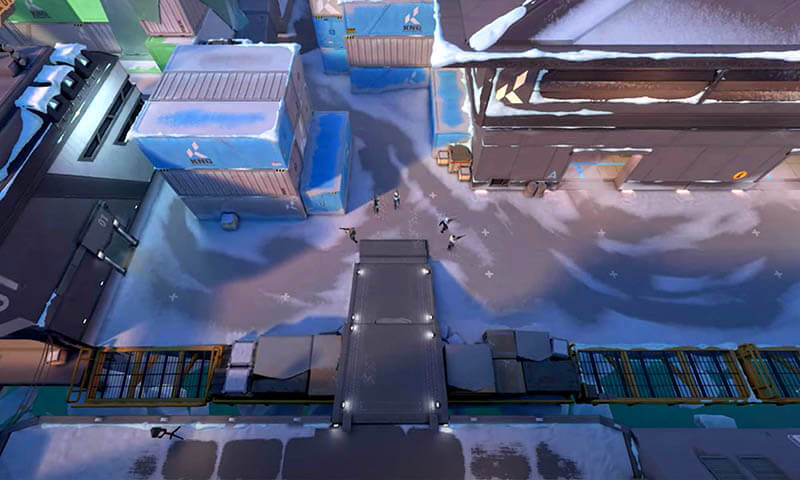 With its tight corners and tough angles, Icebox is a great map for camping in Valorant. There are lots of effective hiding spots that you can use. That goes for your enemies too so be cautious when moving around. It’s always good to have a teammate covering your back.

We all know how powerful high ground can be in combat. Icebox offers many opportunities to gain the high ground position so use to your advantage. You can use the heights on A site or jump on shipping containers to gain a vertical edge over your opponent. When you have the higher ground, it’s much easier to shoot at your enemies, and it’s harder to be hit.

Whit that said, mobile agents such as Jett and Raze are great on this map.

As Icebox is a tight, fast-paced map, you’ll need to learn the callouts if you want to win. Communication is key to any victory. Watch a YouTube video or two on callouts for Icebox, then begin practicing with these in your teammates.

When playing Icebox, be aware of your surroundings. The enemy might be camping around the corner or watching you, ready to snipe. Always check your back. The consequences of losing a teammate on this map can be huge. 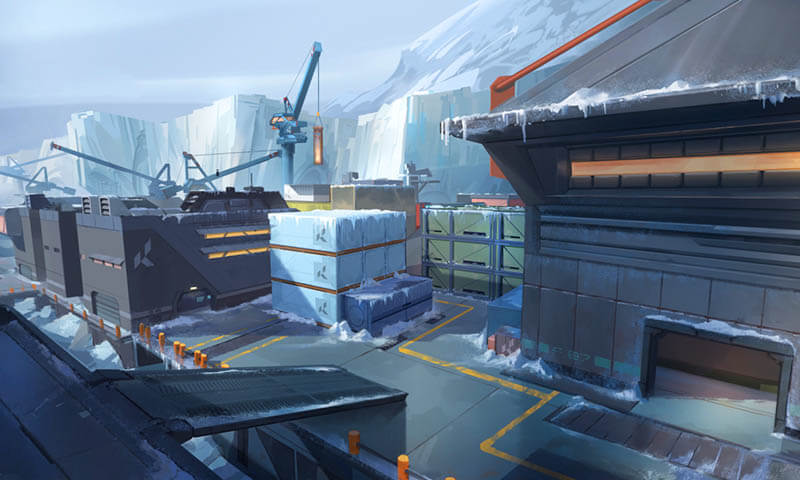 Now that you know a little bit more about the map, we’ll look at some of the best agents to play on Icebox:

What are your thoughts on the new Valorant map, Icebox? Have you tried it out yet?

Want a boost in your competitive play or rank? Want to level up one of your agent contracts, unlocking cool items, and getting awesome achievements?

Here at Boosting Ground, we offer tons of services to help you progress in Valorant. With our account leveling & reward system, professional players, 24/7 support and low prices, we will give you the best Valorant services possible. Our many Valorant boosting services are trustworthy and reliable, helping you take your skills to the next level.