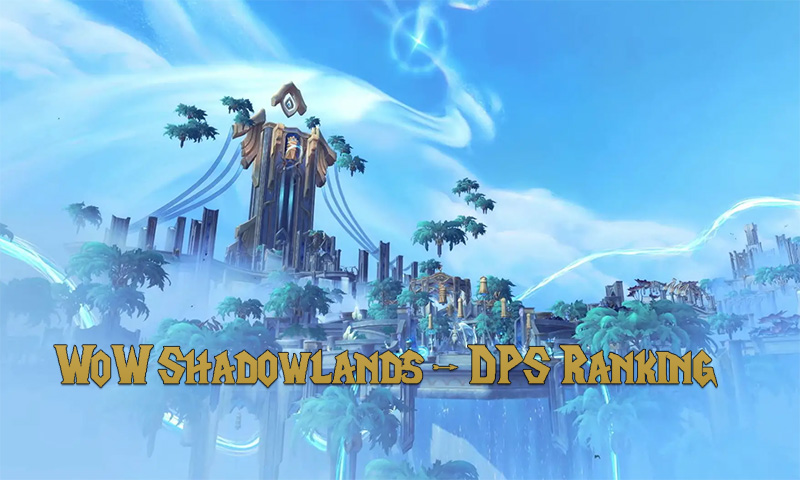 Shadowlands patch 9.2 has changed a lot of things, particularly when it comes to DPS ranking. Seems like Blizzard have really nailed the balance with this one.
With the new raid that was introduced in the patch, now it’s even more important to figure out what damage spec is optimal in the new setting.
That can be a difficult task, especially for newer players. That’s why in this article, we’re going to cover the best DPS setups after the Shadowlands 9.2 update.
But first, let’s explain what DPS is and how the ranking is calculated. If you’re already familiar with that, feel free to skip to the next section, where we will cover the Top Tier DPS specialization rankings.

How Does DPS Ranking Work?

DPS (Damage Per Second) refers to the damage dealt by a person or a group per second. It’s a more practical measure of plain damage because it allows different characters on a range of levels to compare their damage output more accurately.
While the term DPS is used to describe applying damage to a target, you can also see it in reference to the character whose primary role in a group is dealing the majority of the damage.
There are two types of DPS - Burst and Sustained.

Burst damage is best used against targets at relatively low health. Most classes in WoW have at least a few spells or abilities that can quickly generate high damage.
This is the preferred type of damage in PvP environments, but the main problem with Burst DPS is that usually, it’s too expensive or has too long of a cooldown to be sustainable.

Sustained damage is the constant damage dealt over an extended period of time. High Sustained DPS is preferable against targets with relatively high health. With the right specs and gear, every class is capable of doing good sustained damage.
Hunters, Mages, Rogues, and Warlocks tend to have the highest sustained DPS, and that is why they are considered "pure" DPS classes.
Keep in mind that Sustained DPS is best calculated on a one-boss encounter, because full raid or dungeon DPS calculates AOE damage into your overall DPS, greatly increasing it. 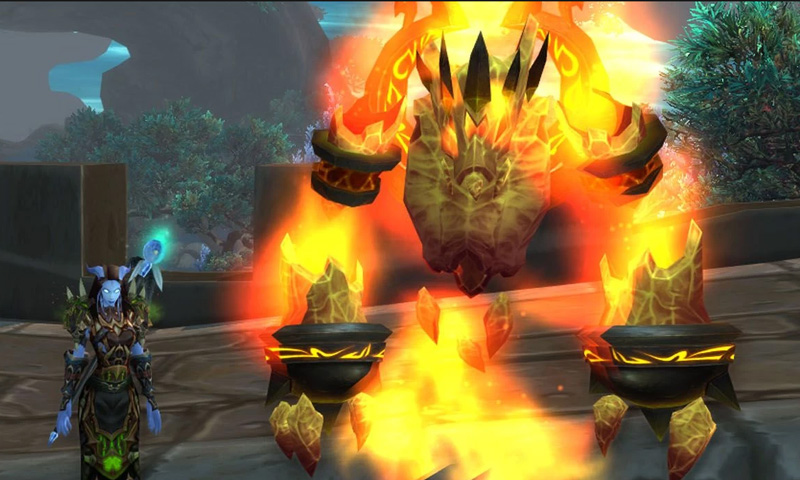 According to the World of Warcraft Wiki, the general formula for your weapon's DPS is calculated like this:
Combine the minimum weapon damage, plus the maximum weapon damage and divide that number by 2. Then, that number gets divided again by the weapon speed rating.
So, let’s take a random Sand Polished Hammer with a min damage of 97, max damage of 181, and a weapon speed of 2.60. The formula would like this:

Keep in mind that some weapons also have extra damage effects, for example, "Holy Damage". This changes the formula slightly by adding the min and max values of the extra damage to the averaged weapon damage.
Let’s say the same hammer had an additional 20 to 40 Holy Damage. Then the formula would look like:

The formulas for Ranged and Spell DPS are calculated in a similar way, just with different parameters.
As you can see, there are very reliable ways to calculate and rank DPS across all kinds of characters and specific situations. So with that in mind, let’s move on to the WoW Shadowlands DPS Ranking. 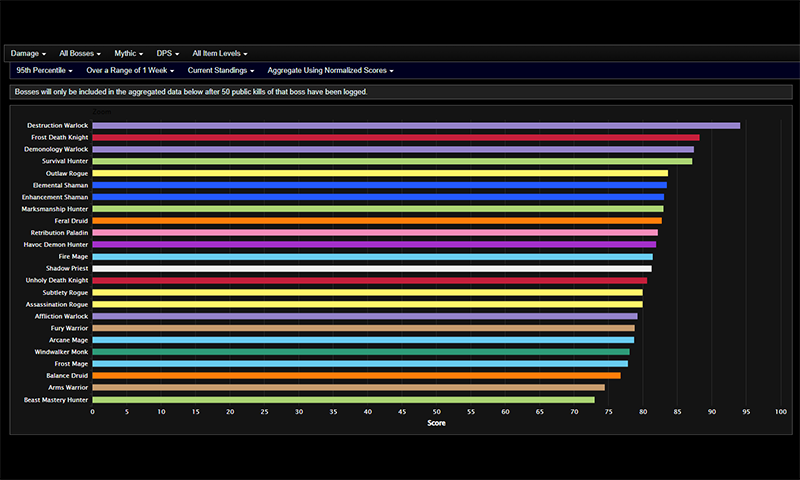 The Demonology Warlock spec offers exactly what you want when facing the hardest encounters in the game. Demonology does top-tier damage on a single target with its super-strong one-minute burst window. And at the same time, it also has the most room for improvement out of any other DPS specialization.
If that wasn’t enough, thanks to Demonic Consumption, Demonology is the only DPS spec that gains damage from having a larger health pool.
This leaves room for some very interesting possibilities and tactics. For example, you could give Demonology large damage increases to their burst window, if you can manage to coordinate support from other classes and use cooldowns such as Rallying Cry.
On top of everything else, Demonology is currently the single most durable DPS class in the game. The incredible comb? of one of the best defensive toolkits and a 20% DR passive, makes them extremely durable for a ranged DPS.

The Fire Mage also offers an excellent one-minute burst window that’s great for both AoE and single-targets. In addition, Fire Mages are quite mobile, have strong execute damage, and they still possess one of the best defensive toolkits in the game.
Fire is an incredible progression spec, so it’s no wonder it’s a very attractive choice. For Patch 9.2, Mages, in general, look very promising, with Fire being the go-to choice for most players.
Actually, one can argue that Mage overall is currently an S-tier class, as it seems that now all 3 Mage specs are super viable in Patch 9.2. And every different build brings its own strengths to each encounter.
If you are a good Mage player, and you’re capable of using all the specs well, then you are in a very strong position for the new raid.

After the strong recent buffs, Subtlety can now proudly claim to be a top Rogue spec.
Apart from super strong DPS and a passive cleave, Rogues also have exceptional mobility, Cloak of Shadows for immunity, and Feint for survivability.
Subtlety Rogue is now definitely a melee DPS powerhouse in WoW Shadowlands.

Enhancement Shaman has a great complete toolkit, with some of the highest sustained single-target damage, making it a really fun and viable choice, when it comes to DPS specializations.
It has a competitive cleave, decent utility, and one of the most important buffs with Windfury Totem.
Enhancement Shaman can be absolutely insane and incredibly fun when paired with the right group.

Balance Druid doesn’t have the highest single-target DPS output, but they have the most well-rounded DPS setups in the game.
Starfall in particular is a truly unique ability. It enables Boomkins to constantly cleave spread groups of enemies in a way that no other class can match.
While not important in most fights, Balance Druids are sometimes irreplaceable. Thanks to their unique abilities and some of the most powerful burst cooldowns in the game, Boomkins are perfect for getting you through some of the trickier parts and the hardest encounters.
Another thing about Boomkins is that they benefit massively from a second Legendary, and with access to utility spells such as Innervate and Stampeding Roar, they can easily fit into any raid comp.

After the recent update, Destruction Warlock has once again emerged as a great DPS specialization in many situations. This type of spec is probably the best for ranged AoE DPS in the game, while still performing well on single-targets.
This spec is not quite as strong for pure single-target DPS as Demonology, but it’s very adaptable and its AoE excellence makes it a solid all-around pick to play in almost any encounter. 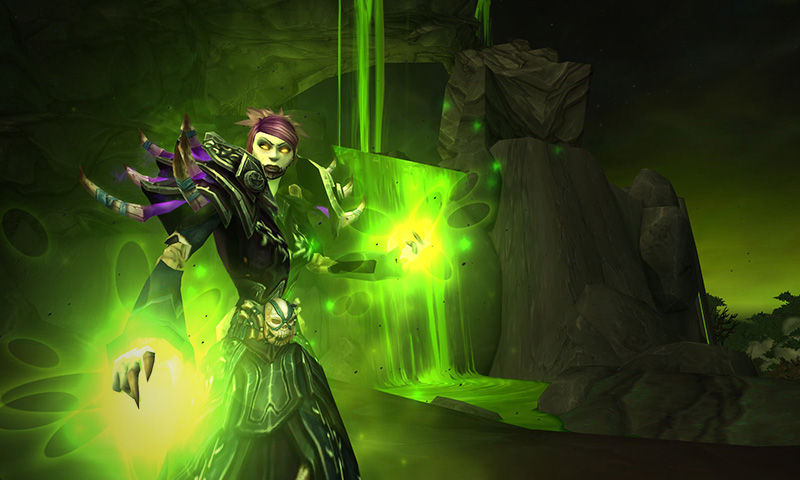 Historically, Shadow Priest has been a spec that either excels or bottoms out, and until recently it’s been pretty much at the bottom. But after Patch 9.2, this specialization is once again looking quite promising.
They have a solid burst, and their strong single-target damage output makes them worthwhile in the new Sepulcher of the First Ones raid.
Unfortunately, Shadow still lacks the utility and defensive capabilities of other top-tier classes, but with high enough damage, it’s a very viable and extremely fun option.

After the massive nerf to Necrolord, Fury’s damage and utility took a big hit. However, Fury is still an exceptional DPS that utilizes the strongest non-healer raid cooldown in the game.
Fury Warriors have solid single-target damage, while also bringing some great support and utility to any raid group.
Even without the nerfed Necrolord Covenant, they bring the strongest defensive raid spell in the game, that does not come from a healer - Rallying Cry. Plus, they are still one of the most durable damage dealers in the game.
They also have maybe the strongest sustained execute damage out of any other class and they can transition to AoE and cleave almost instantly.
In a raid where melee is important, Fury is going to be one of the best additions you can make to your raid group.

Every raid usually needs at least one Demon Hunter for their unique 5% magic damage buff that they bring. That’s pretty much enough alone for them to be put on this list.
Aside from that, the Demon Hunter also has a powerful 2 to 5 target cleave and generally a good burst AoE damage.
Their single-target damage is slightly lower in the new patch, but they are still a great choice to have in almost any raid group.

These are not as strong as the Tier-S and Tier-A specializations, so we’re not going to cover them extensively. But still, these specs are absolutely viable in a lot of cases, and you will be seeing some of them quite a bit, as they are common in many raid groups. 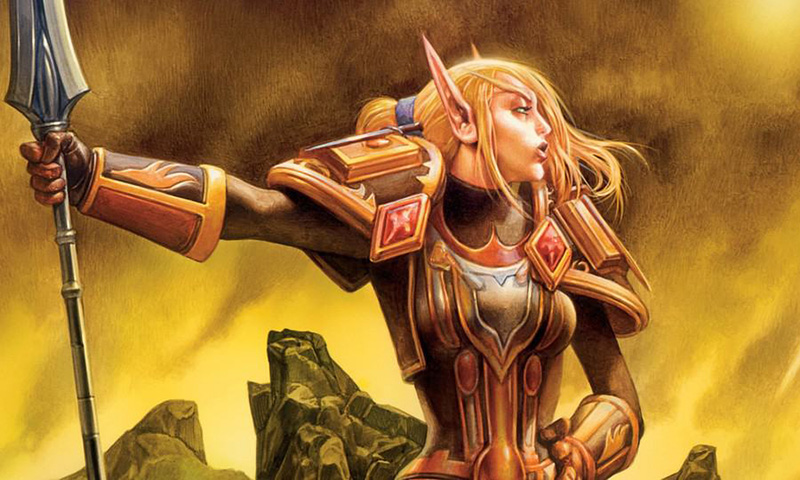 The specs listed here might perform well in Mythic+ and against certain bosses, but generally, they are not ideal for the encounters in Sepulcher of the First Ones.

In an incredible MMORPG like World of Warcraft, you need to constantly invest a lot of time to grind for levels, run a bunch of the same raids, dungeons, and events, and overall do a lot of repetitive work.
These everyday activities can very quickly start to feel more like work, rather than fun and enjoyment, but such is the way of WoW.
If you have limited time to play the game and you just want to enjoy the fun parts of the game, boosting can be just the thing for you.
It’s a good service for new players looking to quickly get to end-game content, but also for more experienced casual players, who don’t want to waste their limited playing time on farming the best loot.
But what is WoW boosting?
Boosting essentially means that you’ll be delegating some of the not-so-fun aspects of the game to professional players.
This service basically guarantees that your character will complete the hardest raids, dungeons, and all of the other important end-game content.
At the moment, this is the best way to save yourself a ton of time, by having someone else do the grind, while you enjoy the more fun parts of the game.
But if you don’t want someone else playing with your account, there are other boosting services like coaching or just playing with a top-level player, who can help you grow your character much quicker than you’d be able on your own.